We use cookies to provide the best possible shopping experience. Don't want them? Call in your order US Toll Free 877-822-3318.

FREE SHIPPING on orders $75+ delivered within the US - see details

I have finished updating all Hades Gothic and Steampunk shoes with their new for 2015 styles added, better photos added for all products, stock levels updated, and prices actually lowered on a number of styles!

Originally launched in 2010 as the brand Metropolis, Hades has grown into a well acknowledged designer and manufacturer of provocative heels and sexy footwear for women with a touch of alternative and designer taste that hasn’t been seen in our new generation of fashion. Hades shoes have been requested in numerous photo shoots, cat walks, TV shows and even celebrity events!

As a strong promoter of individuality rather than conformity, Hades has put renowned designers and shoemakers together to form one of the most beautiful collections of shoes, each design having its own story and craftsmanship that is sure to make heads turn.  Many Hollywood celebrities have become fans of Hades including Whoopi Goldberg who has worn several of their styles (and some Demonia shoe styles too!) on her hit TV show, The View.

I have been an authorized dealer for Hades from their inception! I love Hades blend of styles from high heels to lower flats in sizes from 6 to 11 for women. Their line includes several signature styles including a multi-piece spinal column heel on styles such as Raven, the amazing gear butterfly on many of their steampunk styles such as Sky Captain, and their new Iceberg Wedge heel-less style on Gleam.

Be sure to check out the full range of Hades Gothic and Steampunk Shoes and Boots on GothicPlus. 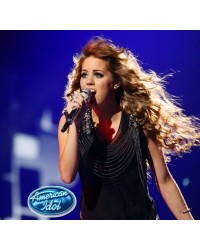 Get the awesome Hades Raven Boots American Idol purchased from GothicPlus.com for Angie Miller to wear in Season 12 of the hit show!